The annual Cavalcade of Lights pyrotechnic show fired from Toronto’s iconic City Hall is an event where Danger Boy really ratchets it up a few notches. Cavalcade takes place every November, and is the official lead up to the Christmas season in Toronto. We have had the opportunity to be a part of this production for many years now and it is always a privilege. This is the largest pyro and fireworks show held in an urban, downtown setting in Canada and that in itself creates many challenges and opportunities. 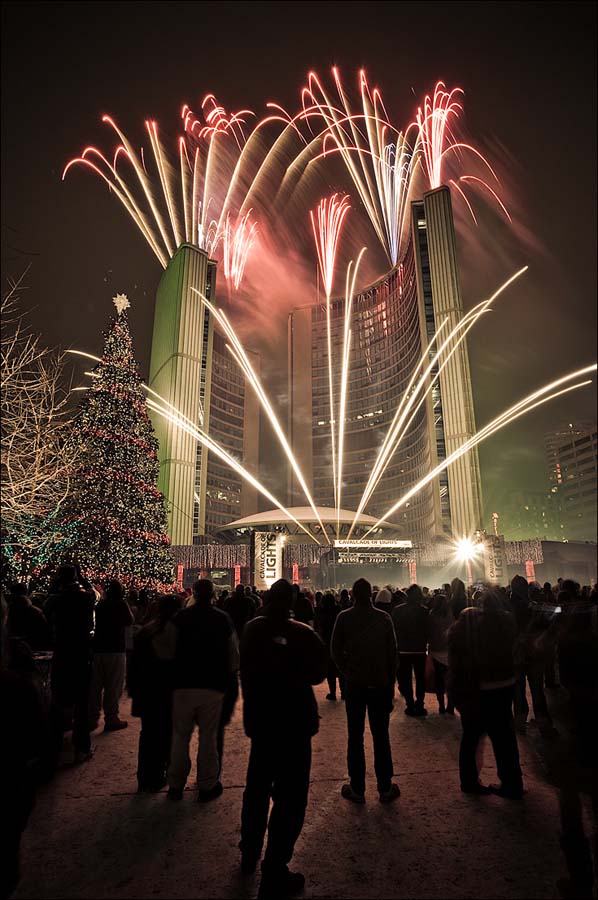 In order to keep this show fresh, and to stand out, we work with our performance division, Circus Orange, to come up with some pyro/performance hybrid elements. This gives the event a special flavor, and makes the production a lot of fun for our entire team. Instead of creating just a pyro and fireworks display, we step it up a notch by designing a unique performance with live stunt elements that usually take place right on the building itself.

In 2008 we staged two pyro rappellers from each of the two towers of City Hall. These daredevil stunt performers had large revolving pyro backpacks that fired remotely in sync to the music.  For this stunt we created our own special pyro proof ropes, and we feel that we are at the forefront of the stunt industry for our ability to work with pyro in a rope access environment.

Another year we created “Pyro Man”, a live action super-hero capable of climbing the 330’ high east tower of City Hall in thirty-seconds and then leaping from the east tower to the west all while bringing his pyro goodness wherever he went. In reality “Pyro Man” was played by five different stunt professionals who each performed one aspect of this extremely complex gag. We implemented everything from an ascender gag to a super high-angle pyro zip line stunt to pull this one off. 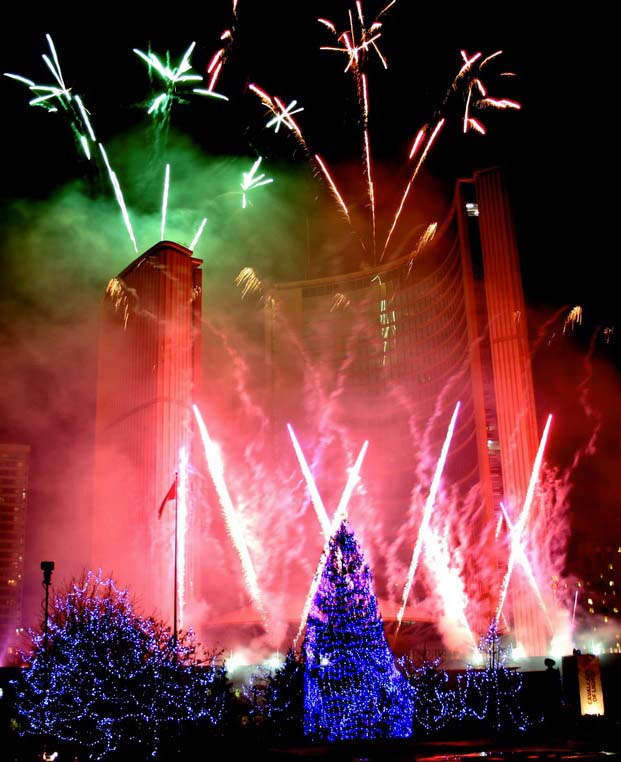 Cavalcade of lights is one of our favorite shows because it has grown with us. It is a show where we are given the opportunity to develop new effects and stunts in a familiar, local environment. The production team at Toronto Special Events is second to none and we always have a good time no matter how cold it gets outside. Much of what we have developed for Cavalcade we have taken out in the world and implemented on other sites and events.