When our partner company, Circus Orange, got the 18 day contract for an outdoor spectacle show at the Canadian National Exhibition (The EX) in Toronto, we really needed to up the scale of our special effects, stunt and rigging design.

This show was to revolve around a one ton dramatic flying set piece called “The JumpJet”. This jet was to appear just like a real live flying vertical take off jet with theatrical, aerial and stunt performances taking place on and beneath the flying framework. 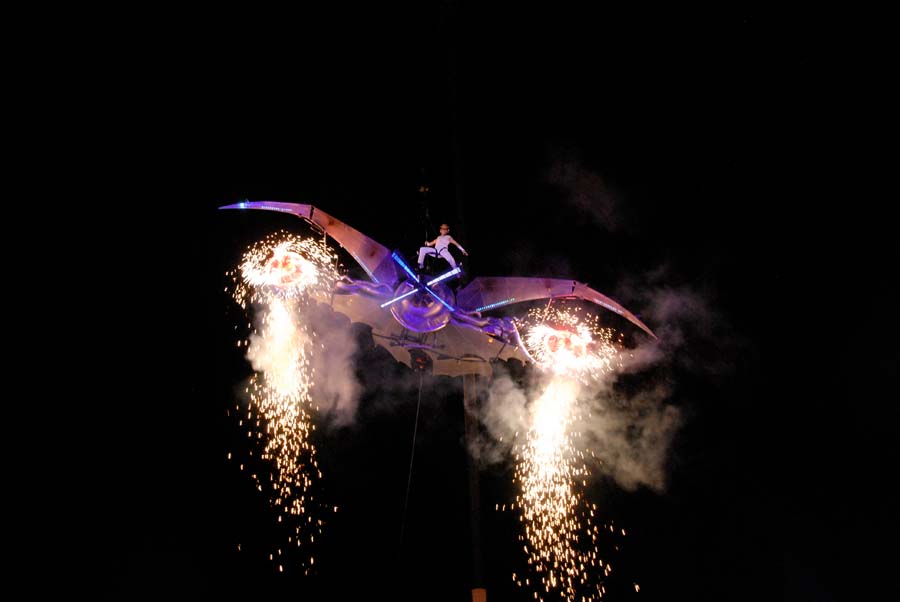 We spent a month designing, fabricating and testing the JumpJet rig at our shop before any of the complex theatrical and stunt elements were layered on top.

Simulated jet engines were what the story called for to create the illusion of lift enabling flight. We created this by mounting our custom liquid flame generators in a hydraulically angled  body designed to look like a jet engine. When the action called for the jet engines it was the combination of live sound effects with the thirty foot long flames that gave the appearance of the real thing. Because these were liquid flames they could be fired just as effectively horizontally or even straight down!

The second part of the illusion was actually getting the whole Jump Jet rig off the ground so it appeared to “fly”. This we did with a 70 ton industrial crane and some complex rigging that would give us full control of every axis. The JumpJet could pitch, roll and yaw just like the real thing. In the dark night’s sky the crane vanished leaving just the illusion of a mad max styled contraption high in the sky.

We rigged a circus trapeze and bungee act below the JumpJet and a live action stunt scene above. One particularly dramatic moment in the action called for an engine “malfunction” to send the JumpJet into a spiral to earth with the pilot character hanging by one arm from the wingtip. We stunt coordinated and provided all the training and stunt safety protocols for this aspect of the show as well.

This show called on all of our specialized services to “get off the ground” and was a dream gig for us. There were many other unique aspects to this performance and we invite you to read more on the JumpJet page of our partner company Circus Orange’s web site.