This is great example of why we love to answer the phone around here:

Hello, is this Danger Boy?
Yes, how may I help you?
Do you guys know anything about tesla coils?
Well as a matter of fact, we do. We actually own one of the largest non-scientific tesla coils in Canada and have demonstrated its awesome capabilities at both live events and for TV stunts. Our head Danger Boy, Tom Comet, hosted a two hour special on the Discovery Channel all about high-voltage and tesla coils.
Oh… Well I guess I found the right place…

A couple of months ago one of the producers at the Luminato Festival contacted Danger Boy to see if we would be willing to provide a tesla coil and the on-site implementation and stunt coordination for a very unique high voltage effect (HVFX).  The world famous performance artist Marina Abramović was coming to Toronto and wanted to perform an interactive exhibition entitled Prototype.  A large, multi chambered tent was to be built in Trinity Bellwoods Park in Toronto and the audience was to be guided through from room to room in groups of four by the pre recorded voice of Abramović playing via a headphones.  The attendees would have various experiences along the way, each based on the artist’s previous works. One of these experiences would involve a tesla coil.

When the participants entered the tesla coil room they would be told to pick up a fluorescent tube.  They would then be told to stand in proximity to the coil.  When the coil fired the fluorescent tubes were to light up creating a very unique experience.  The electricity would transfer wirelessly through the air and light up the tubes though no shock would be felt.  Just the faint smell of ozone in the air.

A tesla coil is a high voltage resonant transformer invented in 1891 by Nikola Tesla.  It takes low-voltage electricity and steps it up through a unique configuration of transformers and coupled resonant electrical circuits to create high-voltage, low-current alternating power.  The end result is an impressive looking device capable of creating high voltage streamer trails (electrical discharges) from 12” all the way up to 10’ in length.

High voltage electricity is not something to be taken lightly, especially when the public is involved.  Right from the start we viewed this demonstration as a stunt and took all the appropriate precautions.  A custom tesla coil and a back up unit was built up to meet all the appropriate Canadian regulations.  Here in Ontario we have the Electrical Safety Authority (ESA) who have jurisdiction over all things electrical.  It took a while to convince them that a device capable of creating 250,000 volts is actually safe.  The thing is that our coil only produces that voltage at 1 milliamp which is far below the lethal level for humans.  Even so, we had to build a custom polycarbonate box to enclose the coil to guarantee that no one could get too close.  Their mandate was that no one could get shocked during this demonstration.

It took some long nights but we got there in the end.  The coil is up and running in the show throughout the week until next Sunday.  If you want to experience our tesla coil and a series of other unique experiences I urge you to go and see Abramović’s Prototype at Luminato Festival. 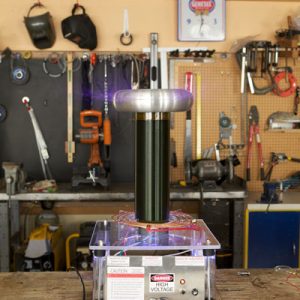 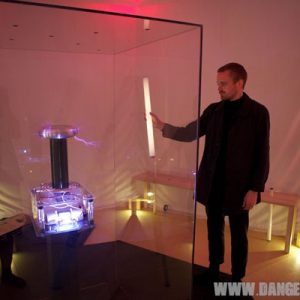 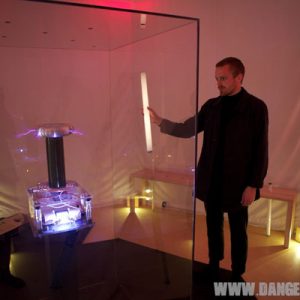 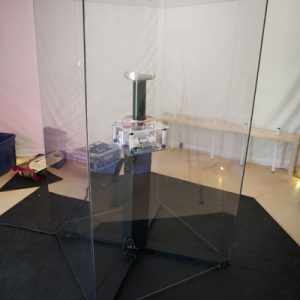 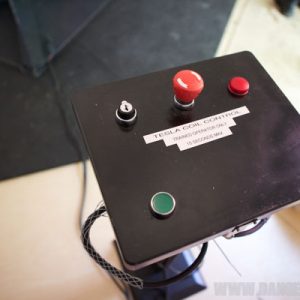