Yesterday the special effects team at Danger Boy had the fantastic opportunity of working on an exclusive photo shoot with Allan Davey and his team from Allan Davey Photography.  The goal of this photo shoot was to capture extremely high resolution images of some of our very best flame effects.  This was a terrific excuse to fire off some of our favorite flame effects over and over, outside of the normal constraints of a show (no time deadlines, no audience perimeters, no formal cues etc.)  This was a dream gig!

We started by helping his team set up a large black background so the flame effects could be “separated” from the rest of the image in post production (Photoshop).  Allan Davey is a master at creating extremely complex photo montages made up of many photos and individual elements.  He creates a lot of book covers for authors as well as corporate marketing for the aviation industry.  He told me that sometimes he will be asked to create detailed photos of air planes that don’t even exist yet.  He will be given just the specifications and has to create a better than lifelike representation using photo elements from other objects.  His work is really is amazing and you really need to see it.

We started the shoot with one of our propane dragon units.  This is a propane gas effect that fires a repeatable, billowy fireball up to 15’ high.  Right away I could see that Allan was getting some spectacular shots and we weren’t the only ones having our dream gig.  He was shooting on a Phase One, 60 megapixel camera so the detail he was able to pull out of the flames was like nothing I had ever seen before.  I felt like I was seeing flame for the very first time in his viewfinder window.  Amazing!

Next up we moved on to shooting one of our liquid flame throwers.  This unit we built ourselves and I still don’t think any other effects company has anything quite like it.  Our hand held flame thrower is capable of firing very long, skinny flames up to 30’.  What makes it unique is the fact that the flame can be fired in any direction from vertical to horizontal and even straight down.  It is like writing with fire in the sky!  Our flame thrower is extremely precise which is why we use it when we are doing shows with Circus Orange where we fire it right under trampoline performers as they jump high above the flames.  Again, Allan Davey and his team got some wicked shots of this custom flame effect.

We saved the biggest effect for last – a pair of gas bombs.  What is a gas bomb you ask?  Well, this is a staple effect in movie special effects industry –   a 50’ diameter fireball explosion that lights up the night sky.  When you see the huge fireballs when cars are blown up on film you are probably witnessing a variation on a gasoline bomb.  A gas bomb is an effect that we fabricate out of black powder and gasoline and assemble by hand in a large steel V-pan mortar with extra strong ¼” steel side walls.  It is an effect that needs to be treated with the utmost respect and it is always worth the effort.

I think everyone was very impressed with our massive gas bomb fireballs and all the effects fired last night.  I know I will be impressed with Allan Davey’s photos once he is through manipulating them at his studio.  We will post some of the results here as they become available to us.  Oh, and we are already planning our next joint venture photo shoot with Allan and his team.  He said he wants to shoot our high voltage Tesla coil.  It is another one of our effects that I have never been able to get a good photo of but I just bet that Allan can.  We will keep you posted.

Here are some of the photos we took during the shoot.  THESE ARE NOT ALLAN DAVEY’S SHOTS – his will be posted at a later date. 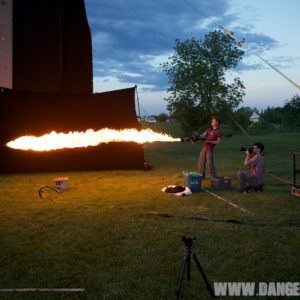 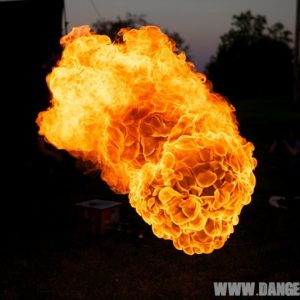 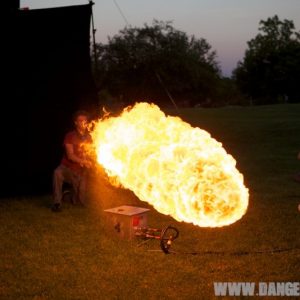 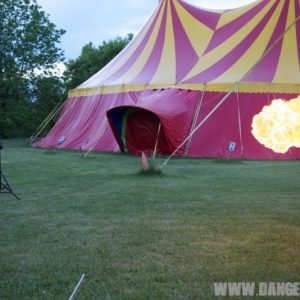 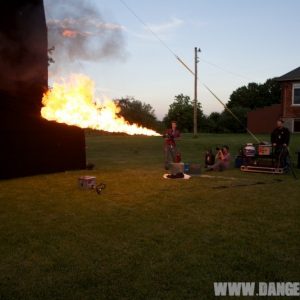 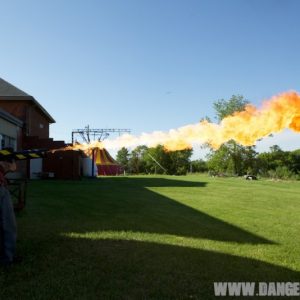 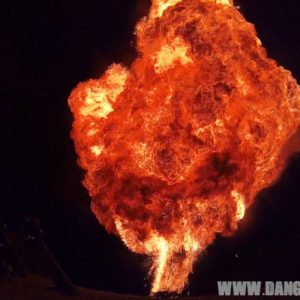