Danger Boy has done a few TV segments on Discovery Channel’s Daily Planet before and we always have a lot of fun with them.  It is one of the few shows left on Discovery that still has more science than BS and we appreciate that.  Last week they asked us for some assistance as they were doing a segment on police surveillance drones (AKA quadcopters, UAVs etc) and they wanted Danger Boy to “spice it up” a bit with some real world explosions.  This sounded super exciting  as we love big blow ups and, drones are something that we have been getting into recently with the purchase of our shop DJI Phantom quadcopter.  Right away we loved the Phantom quadcopter but we realize that it is just a consumer model.  We were really looking forward to seeing what the real high end surveillance drones could do.

Our team gathered on an secret site near Burlington Ontario where the police are allowed to blow stuff up whenever they like.  We then staged a couple of pretty large scale gas bombs directly behind the Daily Planet host Ziya Tong.  In her opening sequence the police drone hovered overhead capturing the shot as Ziya read her intro.  On cue we set off a 40’ diameter gas bomb went off behind her and everyone loved it.  Ziya then interviewed our old friend Andy Olesen of the Peel Region police and they talked drones.  It will be a fun segment.

After the shoot was over we still had one “hit” left.  Now you can’t really disassemble a gas bomb and take it home.  Not safely at anyway…  We decided to blow this one off with our own drone (AKA Danger Drone) hovering very close above with a GoPro in tow.  Check out the crazy video we got of the gas bomb exploding right from Danger Drone’s POV.  It was literally covered in gas at the end of that shot but all is well though and Danger Drone will certainly live to fly another day.

Thanks to everyone who helped put this dangerous outing together:  The Peel Police and the Daily Planet. 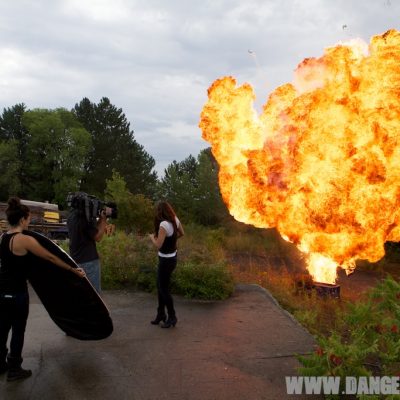 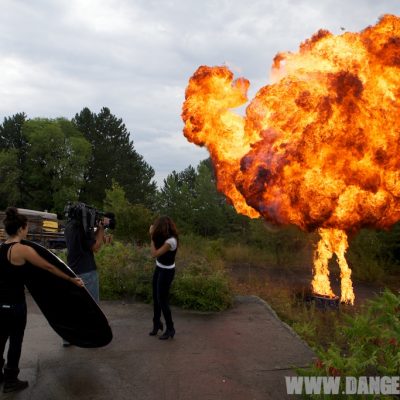 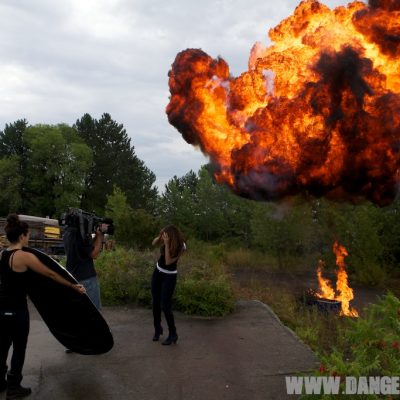